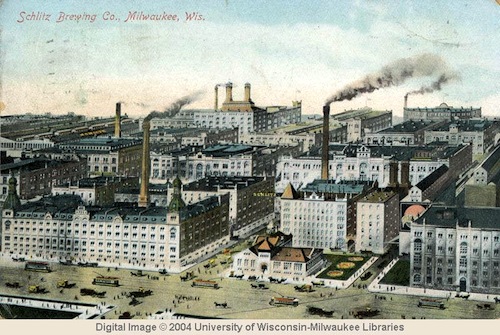 Photo (source): Postcard of the Joseph Schlitz Brewing Company as it appeared circa 1908.

With the colloquial Brew City nickname and a baseball team called the Brewers, Milwaukee is synonymous with beer. Joseph Schlitz Brewing Company was once the largest in the United States and its slogan boasted that it was “the beer that made Milwaukee famous.” However the intoxicating prestige would not last as the brewer stumbled towards self-inflicted ruin.

For immigrants in the mid 1800s Wisconsin was a close analog to Germany. A temperate climate, ample