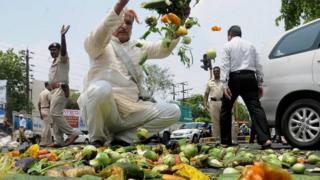 Farmers in the western Indian state of Maharashtra have temporarily ended a protest after the state government promised to write off their loans.

The farmers had been protesting since 1 June to demand better prices for their produce and relief from debts.

Experts say the announcement will put pressure on the state's fiscal health.