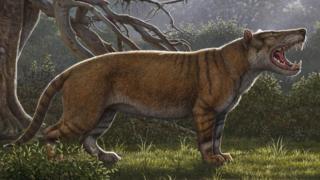 A new species of giant mammal has been identified after researchers investigated bones that had been kept for decades in a Kenyan museum drawer.

But the huge creature was part of a now extinct group of mammals called hyaenodonts.

The discovery could help explain what happened to the group.