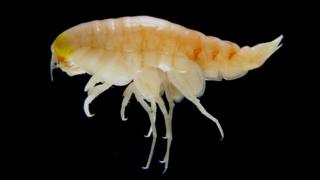 Chemicals banned in the 1970s have been found in the deepest reaches of the Pacific Ocean, a new study shows.

Scientists were surprised by the relatively high concentrations of pollutants like PCBs and PBDEs in deep sea ecosystems.

Used widely during much of the 20th Century, these chemicals were later found to be toxic and to build up in the environment.

The results are published in the journal Nature Ecology and Evolution.

The team led by